THE PRIMARY SYMPTOMS OF NAME LOSS

A theatrical adaptation of a diary found in the cloak-room in the Soviet factory Vtortshermet in the autumn of 1984. Mystic theatrical trip through spheres of consciousness.

„Now a word came stealthily to me, and my ear took fright at it. In thoughts from the visions of the night, when deep sleep falls, fear came upon me, and trembling, which made all my bones to shake. Then a spirit passed before my face; it made the hair of my flesh to bristle up.“

Reviews: „…beautiful in one moment, hideous in next second, cast – aways and homeless, black swans, people addicted to anything, with no identity, barcode on their back and still in some way inwards free…“ didn't let anyone calm. Admirably limp and flexible in moves. Hectically dancing or just keep silence, presently demonstrating the most classical clown sketches, which we know from Chaplin. They have thrown away to containers their ID cards, or maybe it has been stolen to them. Globalisation, banality, 'hamburgerisation' is raging around them." SME daily

„Rather less through the individual vignettes and more an overall sense of mystique, the artists expose the idiocy and futility of life with sensational impact.“ Andrew Richardson, Metro Edinburgh

„Violence, faith, innocence, hate and love are discharged from the stage. Pure emotion… It was a loud, hectic show, which overpowered and overexerted the audience.“ Spots Arena

Awards: The Platinum Globe for the performance The Primary Symptoms of A Loss of Name at the Hight Festival 2003 in Yerevan, Armenia

The Grand Audience Prix, Krzysztof Mieszkovsky's Prix and The Critics Prix at the international festival ZDERZENIE 2001 for the performance The Primary Symptoms of Name Loss in Klodzko, Poland 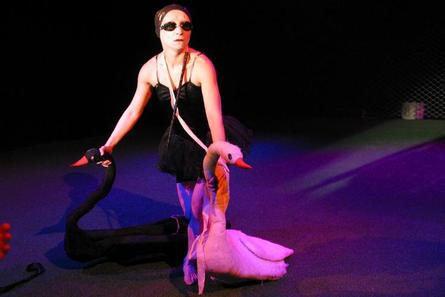