The self-chosen dogma in the earlier albums of creating acoustic versions of electronic originals is abandoned on their 2012 release „Kaleidoscope“ and the repertoire focuses on own compositions. Still using jazz as basic vocabulary, the Frankfurt band project around jazz pianist and DJ Matthias Vogt takes the liberty of extending this freedom. Over the years, [re:jazz] has developed an own language of form which is still in the area of conflict between acoustic and electronic music and for which they are internationally recognised as pioneers, but which they use with considerably more electronic references on „Kaleidoscope“. A further remarkable change has left its mark on Kaleidoscope. The new voice of [re:jazz] : the singer „Mediha“ who, following the departure of Inga Lühning in 2011.In addition, the regular seven-man formation has been joined for the anniversary by several musical guests: The most prominent of these is undoubtedly the singer of the Brand New Heavies, the wonderful N'Dea Davenport and the Berlin star trumpeter Studnitzky. 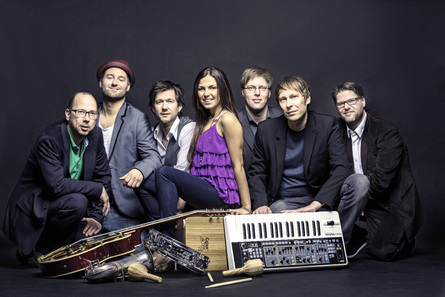