New colonists of the pop empire, Kadebostany have s wiftly catapulted themselves into the spotlight wit h their irresistible blend of pop music devouring unl ikely influences to create a singular yet terribly catchy universe of its own. A striking visual identity and their infamously powerful live performances backed by an exclusive visual show perfect the experience. Be aring both a solid artistic credibility and an evid ent potential for broad appeal, Kadebostany are set to stand as undisputed heralds of a renewal in the pop music world. Founded on an impulse of its charismatic president Kadebostan who decided to gather the best musicians, including the enigmatic diva Amina, and ambassadors of the small European republic of Kadebostany, the band Kadebostany forms in 2008, de termined to export their country’s incredible musical wealth and national values. In 2011, the band released a first album and immedi ately launched a first assault on the international audiences with a string of over a hundred acclaimed live gigs around the globe. Armed with this initial success, the band is curren tly readying the release of their second album, the first single off which, ‘Walking With A Ghost’, is alreay spreading the Kadebostany virus across all borders.

Entitled ‘Pop Collection’, this second album garner ing the greatest hits played on the national Kadebostanian radio will cement the reputation of h it machine that Kadebostany already holds 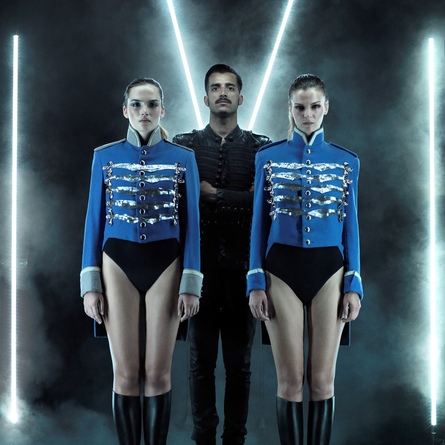