Only once! Only in Europe! Only in Prague! Only in Palác Akropolis! Guests from several European countries will meet and together they will create unique night performance using only an improvisation. Time for the creation is very short and the 100% focus is necessary.

The director will be renowned French régisseur Florent Bergal, who is influencing the development of the new circus in Europe with his characteristic approach to circus arts. He returns to the Czech Republic after one year – in Letní Letná in 2013 we could have seen his unforgettable performance Popcorn Machine by My!Laika.

Max Behrendt (Sweden) Born in Umeå, north of Sweden, has been doing a little bit of everything within circus.2004–2007 he started as a juggler at the circus upper secondary school in Gävle, Sweden and has since then also been educated at Gymnastikhöjskolen i Ollerup 2008–2009. Akademiet for udaemmet kreativitet 2010–2011. And finally at Le Lido centre des artes du cirque du Toulouse 2011–2013. Leaving juggling behind, going through teeterboard and gymnastics to finally embrace duo acrobatics as the real deal.

Hanna Flemström (Sweden), born in the metropol Uppsala (which for everyones information is NOT the suburbia of Stockholm) grew up without any knowledge that she would start with circus. It was first when she was 20, after seeing a show with modern circus, that she suddenly decided that it was what she wanted to do. After building up strength and flexibility during five months, she was taken at the school AFUK. There she met Max and the pair acrobatics and it all continued to Lido and the life as a circus performer.

Nathalie Wahlberg (Sweden) is a 27-year-old energetic dancer from Sweden. After her studies at the Royal Swedish Ballet School (specialization in contemporary dance) she decided to move to the UK, joining the Postgraduate Performance Company of the Northern School of Contemporary Dance, VERVE. Working with the company, during the season –08/-09, gave her good insight to the professional world of dance, working in a company, spending time on the road and on stage during the international tour. After her time in the UK Nathalie decided to explore the dance landscape of the continent Europe. Through frequent visits in Brussels and participation in international dance festivals such as ImPulsTanz (Austria), she built a strong network that became an important base for her further development. She fell in love with the physicality and the direct communication in the vocabulary of companies such as Ultima Vez, RootlessRoot and ROSAS which influenced her development as a dancer and performer. Participating in professional workshops with artists from these companies as well as further on assisting the same people within their teaching and artistic research has given her a strong base of technique, knowledge and tools for creation. In 2011 Nathalie got in contact with the contemporary circus field in Sweden. She was inspired by the direct and human language that the circus disciplines communicates and started to add some basic elements of hand balancing, dance acrobatics and juggling in to her daily practice. Nathalie sees circus as an art form of reality because of its constant work of adaptation, dealing with real situations, pushing the artist to stay in the present moment and exploring the physical and mental state of challenging the limits of movement in relation to a “real problem” and real objects. Out of this interest she created her own circus discipline out of a pair of high heel shoes and used them as a tool in order to enter the present moment of a real performance.

Jonáš Janků ( CR) Jonáš is performer, acrobat , dancer , teacher and musician . In his studies he focused on the visual arts, music and humanties. He found his self-fulfillment in contemporary dance and physical theater. He is interested mainly in terrestrial pair acrobatics, solo akrobatics and aerial acrobatics on silk. He participates in many workshops lead by renowned Czech and foreign artists (among others such as Albin Waret – in Educircation program in Hungary) . He has collaborated on author dance performances with Katarína Rampáčková ; international projects " Scars in stone " and " Lake Grus Grus " Continuo Theatre . He is a member of V.O.S.A. Theatre and its street performance " High dreaming" . He has collaborated as an acrobat and choreographer on the performance “A Christmas Carol " , made by studio DVA. He is one of the first teachers in Cirqueon.

Ondřej Holba (Czech Republic) Ondrej is studying at HAMU, Academy of performing arts- at the department of Pantomime. Since 2007 he is part of the juggler¨s company „Kruhova parabola“. In his work he combines pantimome, acrobatics and theatre.

Stéphanie N´Duhirahe (Switzerland/Czech Republic) Stéphanie is an artist and acrobat coming from Switzerland living already for many years in the Czech Republic. She studied circus school in Québec. She is specialised in air acrobatics using vertical rope. Stéphanie worked with Cirque du Soleil and she participated in many festivals, such as : Paléo Festival, Festival Far°, Festival Les Six Pompes. In 2009 she estabilished together with Morgane Widmer company called Des pieds perchés. 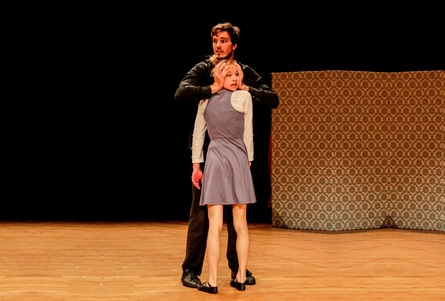