After two decades, the wheels are very much still turning on the Funk orchestra that Japan has to offer. Merged from a university combo to one of the worlds leading group in the genre. The nine musicians on stage in sharp uniforms inspired by 60s fashion; trumpets are spinning up in the air; leader Nakata dancing -Mashed Potato-; from jumping Bebop instrumentals to James Brown funky dancers. Osaka Monaurail just celebrated its 20th anniversary by touring many cities in Japan, Europe, Canada and Australia appearing top venues, nightclubs and festivals including Montreal International Jazz Festival (July 2012) and many others.

Formed in 1992, all of the members were from the same Jazz society at Osaka University (Osaka, Japan). Nakata recalls „I was 19. We were having fun playing/learning Jazz. Our team was known as the best university/college band in playing Count Basie tunes. I was a trumpet player. But, I dropped out because I could not hit high notes. I finally gave up on trumpet, my second love besides piano, and decided to do what I had been struggling to do ever since I was 16, which was to start a Funk band.“ The group was named after the Funk classic, „It is The J.B.s Monaurail“ by the J.B.s (misspelling intentional.) It originally held more than 20 people including many horn players, but soon the band shaped itself up into a 13 piece group. After a couple of university gigs, they started to play local bars & nightclubs in Osaka circa 1994–1995.

Signed to RD Records in 1999, OM released its first album “What it is – What it was” (2000) followed by nine albums: three more albums on RD Records (until 2005); four albums on P-Vine Records (2006–2009); and the latest „State Of The World“ on King Reocrds (2011-present). In Europe, the last three albums are available on Unique Records (Dusseldorf, Germany). In summer 2006 Osaka Monaurail toured six cities in Japan as backing band for a Soul/Funk legend, Marva Whitney, known as one of the James Browns original Funky Divas. Her hits include many Funk classics such as “It is My Thing” and “Unwind Yourself”, “Sunny” (duet with Mr. JB). The team became arguably one of the most exciting collaborations in Funk today and left two albums “I Am What I Am” and „Live In Japan“, three European tours and two Japanese tours. November 2012, Osaka Monaurail played a special show with the great Fred Wesley, the worlds funkiest trombonist, best known for his works with James Brown, Parliament-Funkadelic and the Count Basie Orchestra. An one night only show with OM as a backing band playing more than a dozen of Fred Wesley songs. OM is also known for its works in motion picture field. Not soundtrack, but distribution. In 1998 Nakata bought theatrical rights for two movies: Superfly (1972) and Coffy (1973). The releases took place June 2000 in seventeen theaters across Japan. As an independent movie distributor he collected approx six million yen from friends/investors to distribute the two films theatrically after almost 30 years after their original releases. Nakata has been involved in-and-out movie field ever since. He screened “Soul To Soul” (1971) 30 years after the original release; subtitled many pictures including “Sweet Sweetback’s Badasssss Song” (1971), “Badasssss” (2004), “Soul Power” (2009), and recently “Edification of Weldon Irvine” (1976). After all, as Nakata says, „…the Japanese kids long journey of learning how to play Funk never ends“. The current lineup is – Ryo Nakata (vocal/keyboards/percussions); Kentaro Yamagata & Yohchi Masago (trumpets); Shimon Mukai (tenor saxophone); Katsutoshi Hiraishi (trombone); Dan Hayami & Yuichi Ikeda (guitars); Dai Nakamura (bass); Soki Kimura (drums). 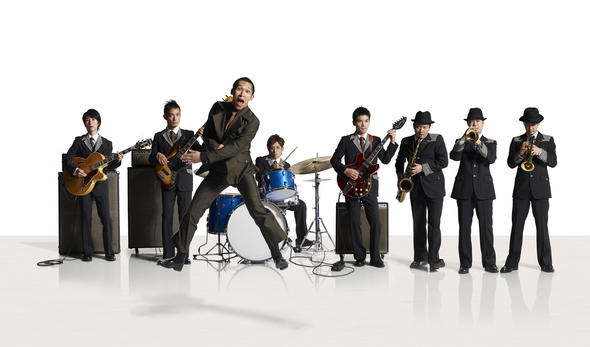