Heroes are born out of the possibility to suffer. Our heroes are clowns who have reached the very limits of their natural environment – everyday problem. Merciless reality is pushing them ever further and over. But it is beyond our threshold where adventure begins, along with the sharp edges of the round world. Laughter is born out of the possibility to suffer. Three idiots taking a trip outside their comfort zones. Final part of Squadra Sua's Heroic Trilogy.

In the current production the topic of SQS and its three clown protagonists are human problems and limitations which exceed the limits of a single situation. Rather than focusing on what can happen to people, they chose to find out who these people (to whom “stuff” happens) actually are. Each one of us is born with “advantages” and “disadvantages”. Each one of us was, in a sense, “gifted” on one hand and “robbed” on the other. SQS not only poses the question of who is the culprit of this metaphysical injustice, but also points the damning finger (how rude!) and demands rectification. The characters investigate a cosmic crime perpetrated upon mankind, while inevitably ending up in the spotlight themselves. Clown-styled look into the outer reaches of the body, pain and violence, leading us all the way back (via some physical pleasure) to the joy of life – the very same life which we have already received broken and whose warranty has just expired.

„The song you whistle to yourself when you're alone in the woods at midnight. Ridiculous!“

This performance was created thanks to the support of Palace Akropolis, the Municipality of Capital Prague, Klub Mlejn, HAMU and our beloved families. 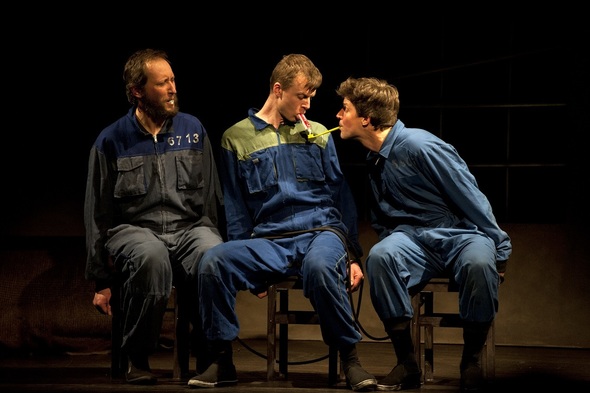