Françoiz Breut is the original pioneer of the Nouvelle Scène Française.

Her career began modestly, away from the limelight, as a background singer for her former partner Dominique A. When A eventually encouraged her to start her own career in 1997, Breut quickly became the main ambassador of the new French scene among foreign audiences. Since then her inimitable voice has inspired countless well known song writers to contribute songs to her first three albums. With her fourth album „À l'aveuglette“, Françoiz Breut is breaking new ground: the songs were conceived in cooperation with musicians of her long time live-band and this time she has written all the lyrics herself. The result „À l'aveuglette“ is a much more homogenous album than its predecessors and – perhaps for this very reason – an even better one!

Her powerful voice has changed many things over the years. It has also opened many doors. If it wasn't for Françoiz Breut, we might never have heard about this wonderful thing we now call „Nouvelle Chanson“: a musical genre, which was defined by her presence and made popular across the world by her voice.

Breut's unique voice was an ideal ambassador for the fascinating French scene and it put the names of the songwriters who worked for her on the international map: Dominique A, Katerine, Yann Tiersen and Jérôme Minière – to name but the most famous. Bands like Herman Düne or Calexico went on to record songs with Breut, a figure as influential as Howe Gelb (Giant Sand) even wrote an ode to her („Letter to Françoiz“). Dominique A once said: „Everybody loves Françoiz“, and he wasn't just talking about musicians but about audiences everywhere. A had understood a simple truth: Nobody can resist the sound of this voice.

Françoiz Breut went on tour in England, the US, Brazil, Japan and Australia before CDs by Camille, Coralie Clément or Rose even went on sale in these countries. Her last tour through Germany with LePop was another success story, her gigs at Haldern Pop Festival, in Freiburger Zeltfestival or Rudolstadt became the stuff of legend.

Single-handedly Breut destroyed the cliché of the ever whispering French chanteuse. Here is a singer with a voice as unique and inimitable as perhaps Barbara, Nico or Marianne Faithful.

Françoiz Breut has already accomplished much. But now she's on her way to new shores. She herself wrote all the lyrics for her new album „À l'aveuglette“. The music is the result of intense studio sessions with long time band members Boris Gronemberger and Luc Rambo: „I was getting a bit fed up with the way I used to work. Of course, it was always interesting to look for songs I could sing and I met many fascinating people along the way. But apart from when I was touring and performing I often felt like I wasn't really part of the whole music making process. I was too far away from the job of the singer/songwriter and that left me gasping for air quite often. Now I can breathe freely. I felt like doing something new because I was afraid of getting bored“ says Breut.

As long ago as September 2006 Breut, Gronemberger and Rambo began to put Breut's lyrics to music. Most of the new material is based on musical sketches by Luc Rambo which were later collectively developed into full-fledged songs. The new approach resulted in an album that is much more homogenous then its predecessors. If the earlier albums were basically collections of songs united mainly by Breut's voice, „À l'aveuglette“ by contrast is an album in the classic sense of the word: it takes the listener by the hand for its duration, it is much more then just the sum of its parts, and it reveals a lot more about the personality of the artist.

Breut's debut album from 1997 had the signature of songwriter Dominique A all over it. „Vingt à Trente Mille Jours“ from 2000 and „Une Saison Volée“ from 2005 were basically song collages. The new album „À l'aveuglette“ is by contrast much more obviously the artistic expression of Françoiz Breut herself.

Not surprisingly the musical preferences of Breut have left indelible marks on the album. Being a young fan of Anglo-American garage rock and punk living in the seaside town of Cherbourg in northern France, Breut used to go over to London for weekend breaks and record shopping. Because she tended to miss the last train home, Breut spent many a night at Victoria Station. Her sister introduced her to Nirvana and Mudhoney, later Françoiz discovered the 60s and bands like The Velvet Underground, The Seeds, The Electric Prunes and The Remains. Now, „À l'aveuglette“ is no more a garage punk album than the Eiffel Tower is the next CBGB's. „À l'aveuglette“ is a modern chanson album. But the music that influenced Breut over the years has left its mark.

„Les jeunes pousses“ might well be the most powerful song of Breut's career, and she never got closer to pure rock music then on „Nébuleux bonhomme“. „Dunkerque“ on the other hand is carried by a strange beat that wouldn't have sounded out of place on a Smog-CD. But despite the rough and rocky edges, „À l'aveuglette“ is still an album of amazing depths and soulfulness, dominated by the most beautiful voice of the Nouvelle Scène Française.

Listening to a song like „2013“, in which Breut sings about the future of her son, we witness an intimacy quite new for Françoiz Breut, an intimacy that demonstrates that Breut has reached a whole new stage in her career. The song will also be featured on the upcoming new Le Pop-Compilation „Le Pop – les filles“ (out in November 2008). And here we come full circle: The very first Le Pop sampler contained Breut's fascinating „Si tu disais“. 7 (?) years later the magic is unbroken. 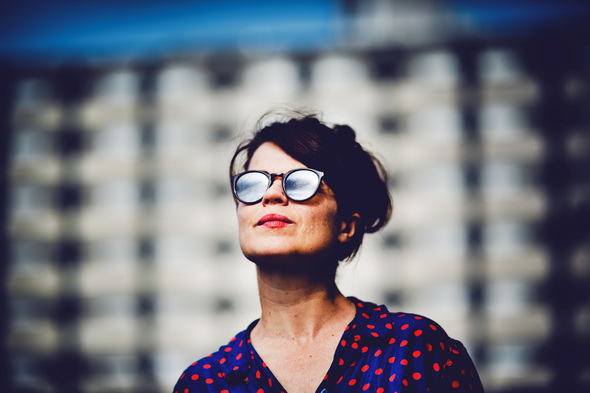