(“The rain is coming”) is one of the most popular Lithuanian folkrock, postfolklore and world music bands, which blends archaic Lithuanian musical folklore with the forms of expression used in rock music. Over more than ten years of its existence Atalyja has earned love of listeners of different age groups. The band seeks to popularize the archaic folklore and bring ancient Lithuanian songs closer to the contemporary listener.

The main part of the repertoire consists of sutartinės (polyphonic archaic songs – glees), calendar, war-historical, and wedding songs. Musical expression ranges from meditative improvisation to hard compositional art rock. Experimentation is not unfamiliar to the band musicians – the melodies of traditional songs are mixed with elements of classic rock, metal rock, blues rock, funk, and progressive rock, as well as classical music.

Lithuanian folkrock band Atalyja formed in autumn of 1998, and in spring of 1999 they made their debut in Kaunas, in postfolk festival “Suklegos”. A year later, the debut album “atalyja” (2000 MC, 2001 Kukū records CD) was released. It received international attention, and was appreciated in folk and world music magazines. The second album „Močia“ (The Mother) which saw daylight in 2004 (CD, Dangus records) is marked by vivid, warm sound. It was recognized as one of the most solid modern folk music releases in Lithuanian discography. In the third album “Saula riduolėla” – “Sun the Roller” (2009, Dangus records) “strict” composition blends with improvisation and experiments in an original way. Not only is the solar theme emphasized by the titles of some songs or the album itself, but is also further strengthened by the album's colourful and sunny sound. 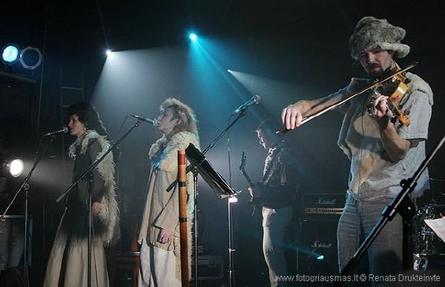